“protect the system of basins which make up the saltflats that host Phragmites and Salicornites which, together with the actual wetlands area, attract the rich migratory and resident birdlife.”

“protect the system of basins which make up the saltflats that host Phragmites and Salicornites which, together with the actual wetlands area, attract the rich migratory and resident birdlife.” 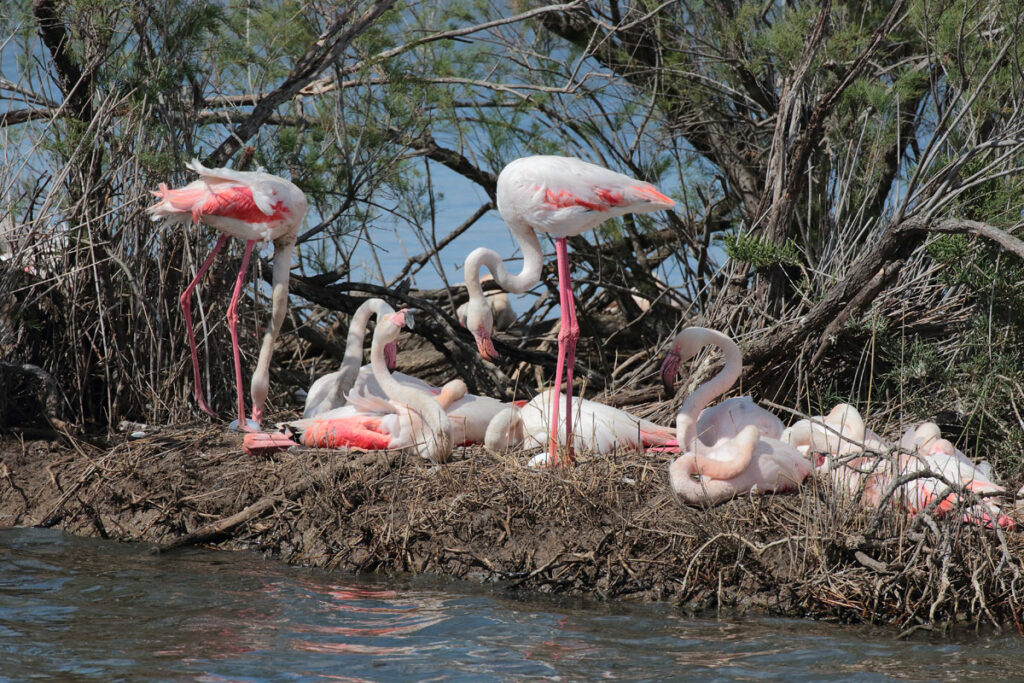 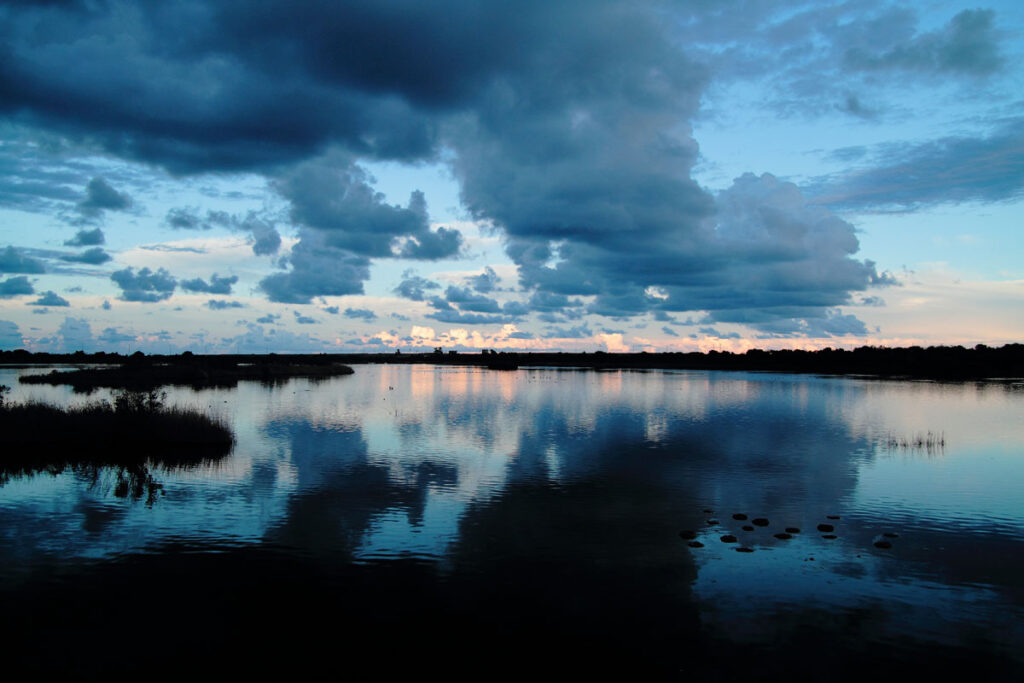 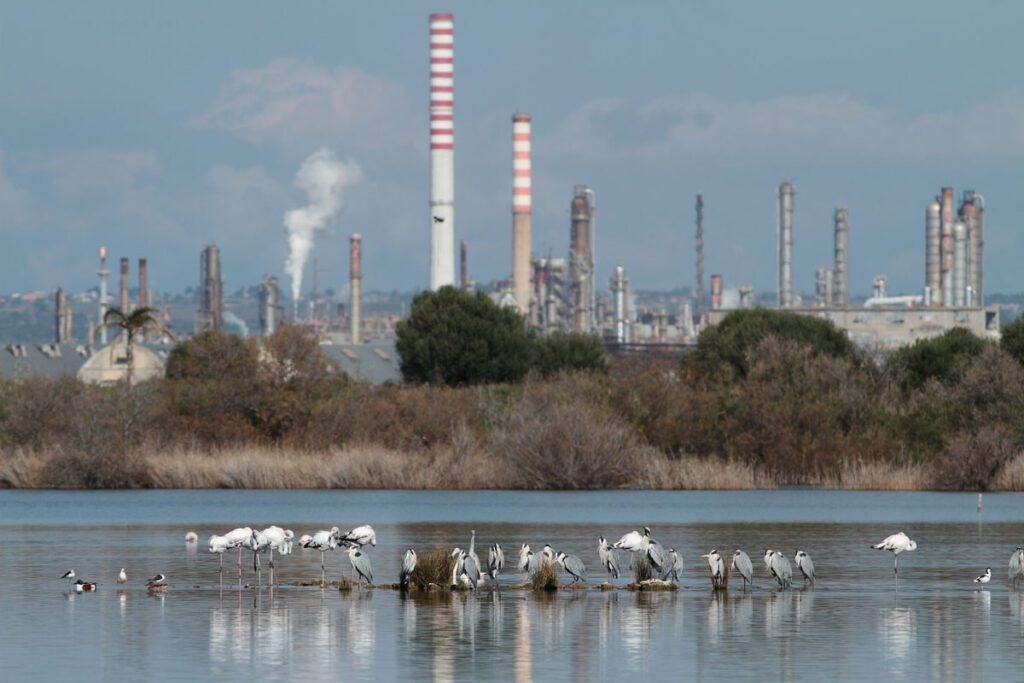 was formally instituted by Ordinance no. 807/44 of 28th December 2000 (Codice EUAP 1099) and was assigned to the LIPU (Italian League for the Protection of Birds). It was formed in order to “protect the system of basins which make up the saltflats that host Phragmites and Salicornites which, together with the actual wetlands area, attract the rich migratory and resident birdlife.”

The Saltflats of Priolo Nature Reserve, founded by the Sicilian Region, protects a small but interesting remnant of the wetlands which used to extend along all the coastline of south-eastern Sicily.

The protected area is also a Natura 2000 site, cod. ITA 090013. Recently the area, with the publication of the “Seventh updated list of sites of community importance for the Mediterranean biogeographical region” in the Official Journal of the EU (OJEU) of 21/12/2013, was the subject of a plan for enlargement which extended the area of the Natura 2000 site from 50 hectares to over 232 hectares, including many priority habitats located to the south of the area, and above all, the Magnisi Peninsula.

A very ancient activity, salt production in this area was already mentioned by Pliny the Elder in the I century A.D. Up until the Sixties, the saltflats “delli Magnisi” extended for over 80 hectares, divided into service pans and salting basins. The industrialisation of the coastal area from Siracusa to Augusta greatly changed the appearance of this corner of Sicily, as large areas of the saltflats were filled in for the construction of the ENEL facility and the consortium water-works, or simply used as a dump.

An oil-pipeline, now dismantled, ran across it from 1956 to 2006. For the dismantling and clearing of the pipeline, a project was drawn up which  led to the removal of the structure over a year and a half. and allowed the area to reclaim some of its ancient splendour. Fortunately the renewed awareness of the cultural and scientific value of the wetlands has made it possible to save part of the saltflats: around 40 hectares which include the area closest to the Magnisi Peninsula, a real “oasis amongst the smokestacks” of great educational interest and testimony to not just the natural, but also the human history of this area.

The nature reserve includes a large coastal pond which corresponds to the ancient basins which collected sea-water, and fits into the system of brackish wetland areas of south-eastern Sicily. The water level is strongly influenced by the rains and can vary between over a metre of depth to an almost-complete summer drying-up, following a dynamic which is typical of the coastal “swamps” of Siracusa. Along the basin’s edges, the mounds of earth which were used for the later in-fillings of the old saltflats, are now colonised by swamp vegetation; some internal divisions, partly demolished by erosion, look like little islands, which together with the ones made over the years by the LIPU have contributed to the colonisation of the area by a greater number of bird species.

Various important interventions have been made in recent years by the managing body which have radically changed the area’s image, transforming it from “open-air dump” to the Most Beautiful Oasis in Italy where to observe animals. This title was won in 2008 in a national competition in which over 190 protected areas and national parks took part, thanks to the votes of enthusiasts who visit the area regularly, such as birdwatchers, photographers, students, etc.

Another important award arrived in 2011, when the reserve was given an award by the Eden project, European destinations of excellence. The initiative was organised by the Presidenza del Consiglio dei Ministri, department for development and competitiveness of tourism, with the aim of promoting models of sustainable tourism.

Over time, it has become a symbol of Nature Reborn which reclaims its space. The LIPU’s contribution has been paramount as it has highlighted the naturalistic aspects, activating over the years a proactive approach to management of the site, creating artificial islands to favour biodiversity and improving the conditions which encourage bird species to use the Saltflats of Priolo for resting or nesting. Great attention has been paid to the fruition of the site so, thanks to the intervention of the town council of Priolo Gargallo and ERGISAB, it has been possible to build pathways inside the nature reserve – over 400mt of paths are available to people with limited mobility – and to create five observation huts, two of which extend into and over the saltpans allowing the observation of animals from an unusual angle.

The collaboration with the nearby Enel Archimede power plant is also fundamental; various agreements for the promotion of the local territory and for the safeguarding of species have been signed.

Unfortunately on the 10th of July 2019 the nature reserve was affected by a large fire which in no time destroyed the vegetation and structures.  After the initial shock, thanks also to the support of visitors to the protected area, the LIPU was able to begin reconstruction works immediately. 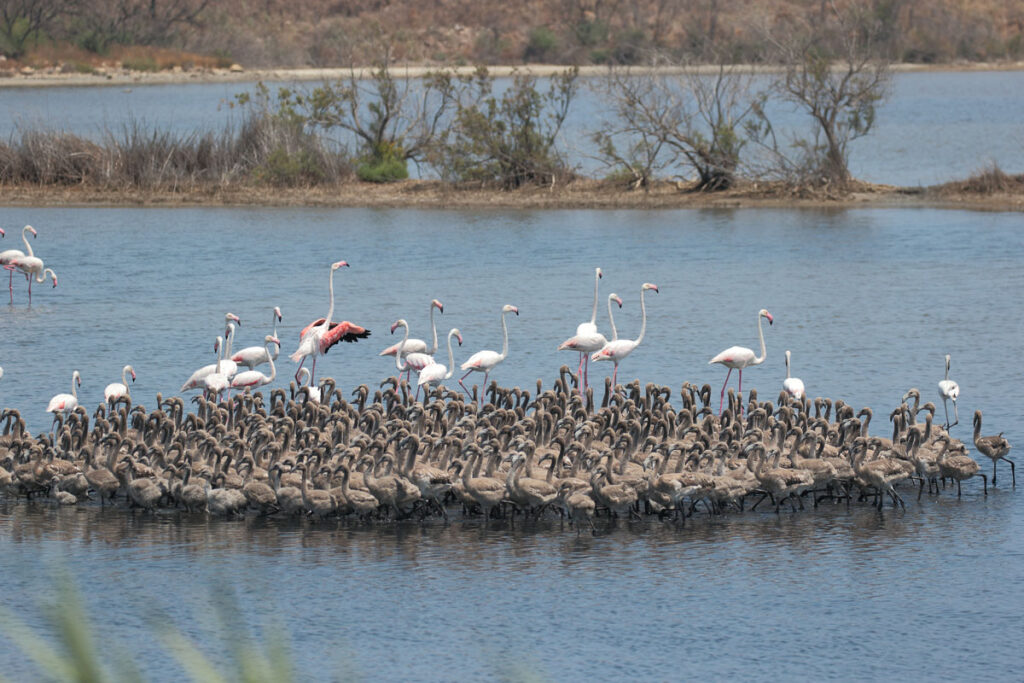 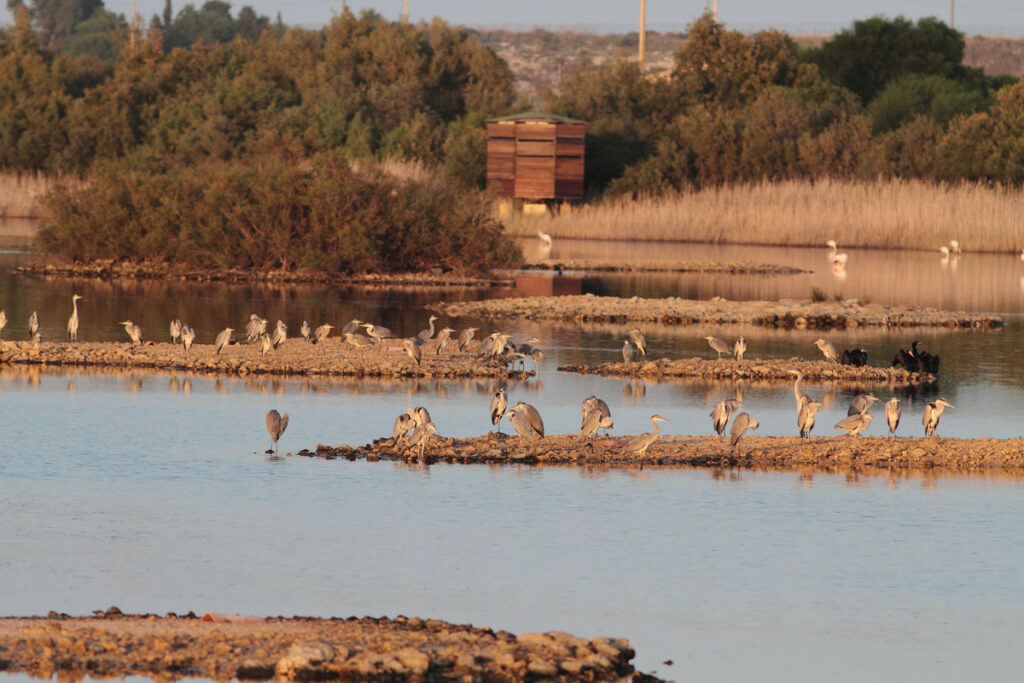 The system of wetlands which still characterises South-Eastern Sicily, from the Simeto estuary to the swamps near Pachino, represents a stop-over for an important number of seabirds migrating in this area of the Mediterranean, and, for a smaller part, an interesting area to winter and nest in (Iapichino & Massa 1987).

The Saltflats of Priolo, with 245 observed species, 80% of which are entirely or partially migratory, offer a significant contribution to the maintenance of the bird communities which require brackish coastal swamp areas. The Saltflats of Priolo are closely connected to the nearby Saltflats of Augusta with which there regularly are daily movements of many aquatic birds.

In the Saltflats di Priolo and the Magnisi Peninsula over half of the bird species of Sicily and around 40% of all the species in Italy have been observed to date. This data is even more incredible when we consider the limited area and its unique position within an industrial area.

The wetlands seem vital to thousands and thousands of migratory birds which transit along the eastern Sicilian coasts each year. The nearby Magnisi Peninsula, with its steppe characteristics, seems like a natural extension of the nature reserve, forming a continuous area suitable for nesting and resting birdlife.

The number of species present and the quality of the individuals fluctuates dramatically, as in all the Sicilian coastal wetlands, affected not only by the migratory movements but also by the water levels conditioned by the rains, evaporation or anthropic interventions. A high winter rainfall can make the saltflats unsuitable for the resting of spring migrators, but favours the nesting of some Chadriforms and the resting of many autumn migrators; on the contrary a dry winter will favour a higher variety of wintering species but puts the reproduction of many species at risk, with an early summer drought, and makes the autumnal migratory stopovers practically impossible.

In late summer the saltflats are also an important resting place for many groups of ardeids, Grey Heron (Ardea cinerea), Little Egrets (Egretta garzetta), Purple Herons (Ardea purpurea),  migrating along the coast of eastern Sicily with daily concentrations in the high hundreds of examples.

The winter presence of ducks is a recent phenomenon clearly connected to the ban on hunting which followed the founding of the nature reserve.

From the late autumn on, various species of ducks stop here to spend the winter before travelling North. In recent years the wintering of Flamingos, Seagulls, Great Crested Grebes, Little Grebes, Western Marsh Harriers and several types of waders has become more common. Cormorants often fly over the saltflats during their movements along the coast. During spring various species of herons, waders, such as the Black Tailed Godwits and Ruffs or Garganeys and noisy ducks who have spent the winter in the African Lakes, come and rest here.

With the coming of spring, only nesting birds remain such as the elegant Black Winged Stilts, Little Terns, Kentish Plovers, Little Ringed Plovers, Western Swamphens and Ferruginous Ducks. During the last mating seasons, these species have flourished thanks to the important management activities carried out by the LIPU, including the building of a series of artificial islands which have helped to improve the numbers of couples and nesting species, such as the flamingos which nested here for the first time in Sicily in June 2015. 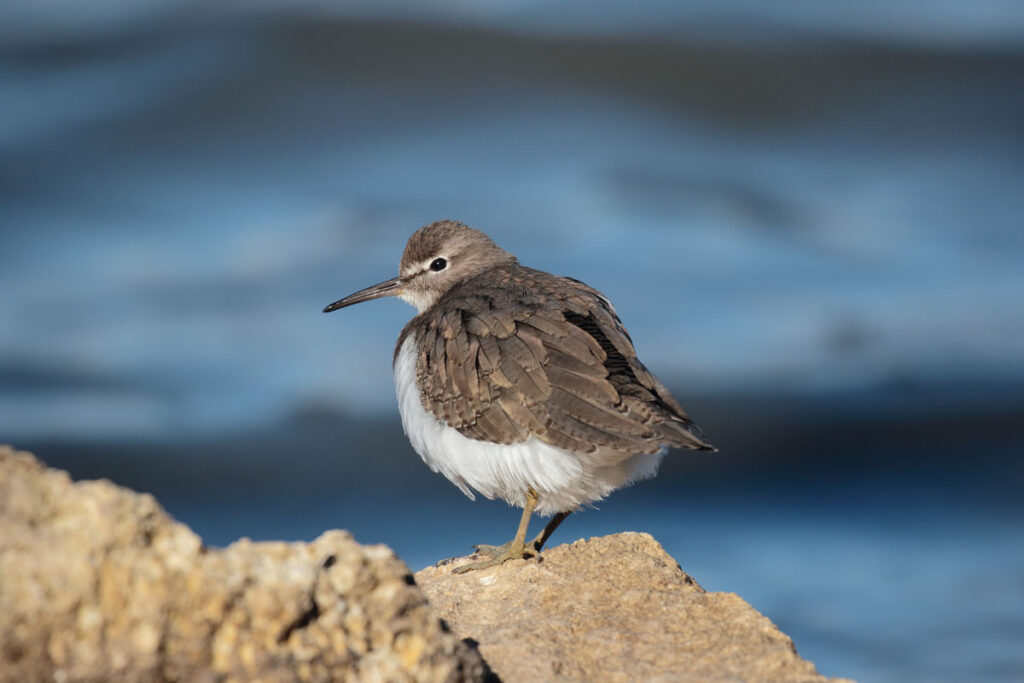 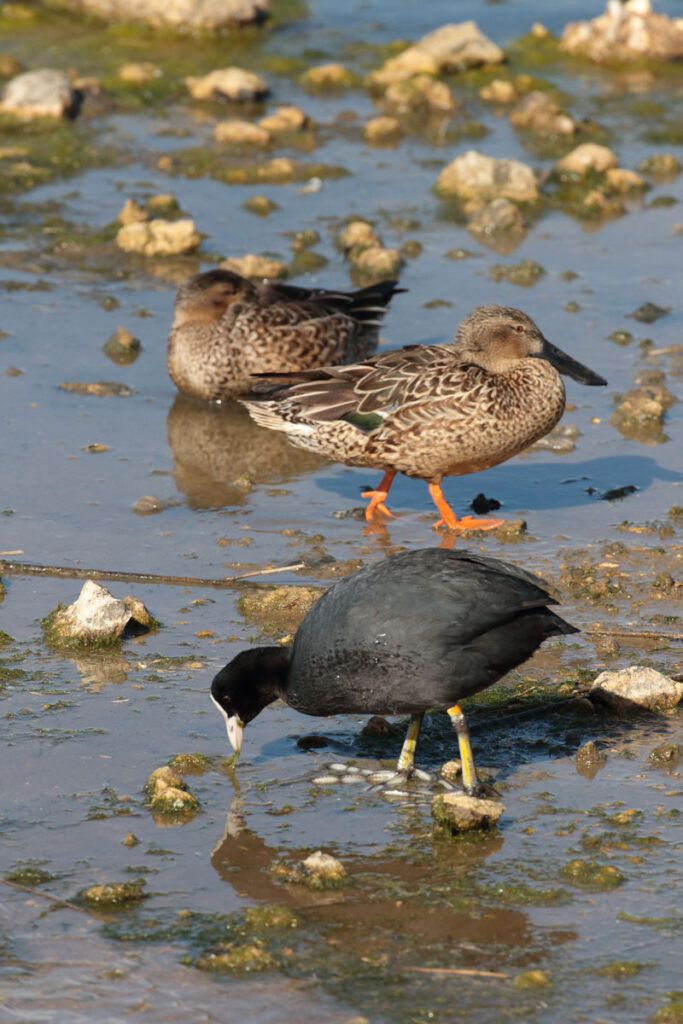 Events organised by the Lipu. excursions, workshops and conferences. 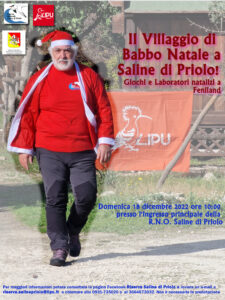 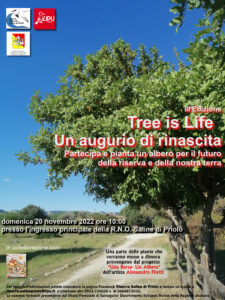 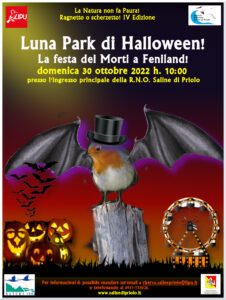 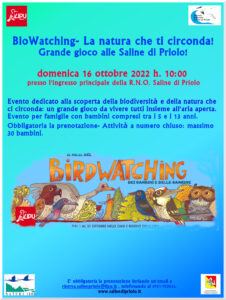